New attacks have re-ignited the historic conflict between Palestine and Israel. Dozens of people have been killed in a wave of violence in the area in recent days.

The West Bank, the Gaza Strip and Jerusalem have been in the spotlight during the past few weeks. The new escalation of violence has left at least 198 people dead, including 58 children in the heart of the Middle East.

But the riots between these territories are not a new phenomenon. Seven decades ago, with the independence of Israel on May 14, 1948, a period of unrest began that continues until today. Israel's conquest of the territories has led to social unrest and a movement that demands the liberation of the Palestinian people. We talked about the latest events and the origin of the conflict with a member of the Palestinian Community of Catalonia and the Catalan Association of Jews and Palestinians – JUNTS (TOGETHER), Salam Al-Maslamani.

What is happening in the heart of the Middle East?

What has sparked the events of the last few days is the attempt to take over the houses in Jerusalem where Palestinians currently live in order to fill them with outsiders. In the face of reprisals and attacks by the Israeli state, Palestinians have risen, both in the West Bank and in historic Palestine, and Palestinians who are within the occupied territory are also protesting because there is an 'apartheid' against them.

In addition, everything happened during Ramadan, a holy month for all Muslims, not just Palestinians, and they were not allowed to pray in the mosque. Israel wants to keep both Jerusalem and the Al-Alqsa mosque.

The origins of the conflict go back years.

What we are experiencing in the Middle East is not a conflict, nor a war, nor a revolt over religion, it’s an occupation. May 15 commemorates ‘Nakba’, the disaster, the day it all started in 1948.

If we look back many years, there was a Jewish minority in Palestine with whom they lived peacefully. Christians, Muslims and Jews have lived together in the city of Nablus in the northern West Bank for a long time. That’s why this area is called the Holy Land, because it’s the land of all religions, where everyone has lived together in peace and harmony.

And it goes beyond religion.

The problem comes from the Israeli occupation, which has created this view around the world of a religious war. And it’s neither war, nor due to religion. Moreover, when you talk to Jews who have lived in Arab countries, especially Iran, they tell you that they’ve always been treated well. Where Jewish people did not live well was in Europe with the Holocaust. Jewish persecution took place in Europe, not in any Arab country

But Israel has taken advantage of this to frighten Jewish people into leaving other Arab countries. Those who believed it and have fled there, saw that it was a lie when they arrived, and some ended up going back. And this is what will happen again after the latest events, more Jews will leave Israel because they will be afraid of staying there, both for their families and for their own lives.

"What we are experiencing in the Middle East is not a conflict, nor a war, nor a religious revolt, it’s an occupation"

Where have the riots taken place?

They’re attacking the entire Gaza Strip and the entire West Bank. In Gaza they’ve attacked from the air with planes and rockets, and in the West Bank by land. Gaza is more or less the size of the Maresme, and right now it’s devastated. They attacked at over 600 different locations, you can imagine what it must look like.

There’s no place where there are no demonstrations or rallies, all of Palestine has risen and Israel did not expect that. The problem is that we don’t have the same strength because one side uses stones and the other uses weapons; one side uses rockets that do almost nothing and the other uses planes that bring down 13-story buildings. Israel is attacking the Palestinian population for ethnic cleansing, but this is not seen in the media. I find out because I listen to the media in Arabic, and there isn't much good news.

Why has this new wave started coinciding with Ramadan?

April is a holy month to get closer to religion, to fast and get closer to the poorest people, to feel more human. That these events happened during Ramadan is no coincidence, these reprisals have been happening every year for seventy-three years. There are many Jews saying “not in our name” because they don’t want this. A friend of mine is Jewish and tells me that he is ashamed of what his country is doing.

The eviction of Palestinian families living in Palestine is another key point. The Israeli Supreme Court was due to hold a hearing these days, but it was cancelled due to the riots.

They will end up being refugees. They will not be given a better place to live, the Palestinians in Jerusalem will have to leave the West Bank and will become refugees in their own homeland. Israel will get what it wants, a Jerusalem that is only for the Jews.

Why is the city of Jerusalem so crucial?

Right now, Jerusalem is divided in two parts, the east and the west, but Israel wants to conquer both parts to make Jerusalem its capital. There is a United Nations resolution from 1948 that ensures free access to Jerusalem and the right of return, and none of this is being upheld. The Oslo resolution from 1993 regarding settlements is not being complied with either, because these are growing more and more each year. That’s what the state of Israel wants, to gradually conquer all the territories.

What are the figures so far for the latest attacks?

The latest attacks have left 115 dead in Gaza, including 28 children; 160 warplanes that have attacked Gaza and more than 500 missiles fired. I don’t know what will happen today, I don’t even want to think about it. I only call for respect for international resolutions and the withdrawal of armies from the Palestinian territories as agreed to in 1967 to achieve peace.

What makes the current riots different from those of years ago?

What’s different is that they have gotten worse. Every time a leader changes on either side, negotiations start again from scratch, and they always move in favour of Israel. We haven’t had good leaders and this is now clear. In Palestine we are increasingly worse off because there are more settlements, more ethnic cleansing and more killings.

The United States is in favour of Israel. Tunisia, Norway and China have called for a meeting to curb attacks on Gaza, but the United States has said it will not discuss the matter until later and that Israel has every right to defend itself, as if the Palestinians did not have that right.

What’s the situation like for the people of Palestine?

Gaza and the West Bank are below the poverty line. Everything is governed by the state of Israel, economic aid is under its approval and the social level is lower and lower. 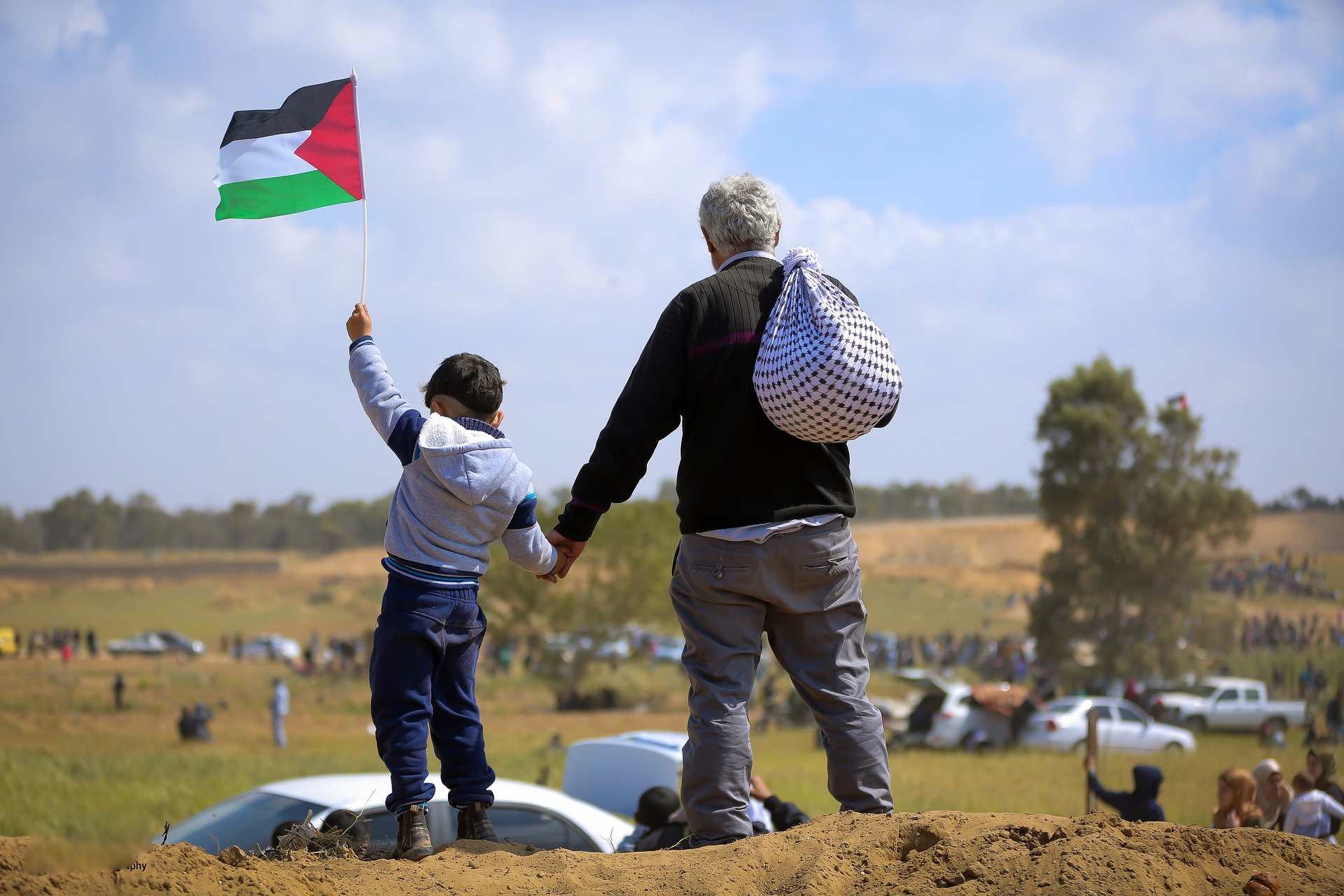 What has been the response of the international community?

The international community is silent. The decision-making power is held by the United States and Israel, it’s as if us Palestinians have nothing to say. In Spain, for example, there are demonstrations, but in France they have all been banned. Israel is gaining ground and the international community is not taking the right stance. And apart from Europe, the Arab countries are not helping either because there have been agreements between Egypt, Dubai, Saudi Arabia and Israel. No one is helping us.

The Oslo Accords of 1993 have not improved, and might have even worsened, the situation in Palestine. There are more settlements, more settlers, more reprisals, more appropriation of land and water... We ask for peace for both sides because we are all human. I call on Europe to speak regarding Palestine and to put pressure on the Israeli state to stop the attacks. We need the support of the people of Catalonia and all the people who believe in just causes. Palestine is an occupied territory and we have a legitimate right to defend ourselves.

Is there a solution to the Palestine-Israel conflict?

There are three possible solutions. The first one, which is the one the Palestinian community wants, is for there to be two independent states with full rights on both sides. Each one living in their land, in their territory and in their country. Living in peace, in harmony and with respect because we are all human beings and there is room for all of us in the world.

Another solution is for there to be a single state under the command of the United Nations, but Israel won’t accept this decision. So, for me, the solution lies in a single state where the Palestinians are under the mandate of Israel. It’s really painful to me as a Palestinian, but it’s the only way for the killings to end and for us to be able to focus on fighting for the fundamental rights of Palestinians administratively and legally. It’s the only solution I see to achieve peace in Palestine.