The opaque war that is bleeding out Ethiopia

Hunger, repeated human rights violations and ethnic hatred are all part of the Tigray conflict, which is shaking up the north of this country in the Horn of Africa.

"I can say that I’ve had very tough experiences as a volunteer: in Iraq, helping those displaced by the war in Syria, for example, but when it comes to human cruelty, Tigray has certainly been the most terrible and shocking". Jaume Torrado, director of the Blanes-based organisation ‘The Good Samaritan’, defines with these words his stay of about a month in this region of Ethiopia.

Located in the north of one of the world's poorest countries, in the Horn of Africa, the Tigray region has been waging a bloody civil war since November 2020. The federal government's military offensive, led by Nobel Peace Prize winner Abiy Ahmed, against the Tigray People’s Liberation Front (TPLF), the dissident nationalist party that ruled the territory, sparked an extremely complex and violent conflict that mixes elements such as ethnic hatred, territorial divisions and the participation of third parties, such as the government of Eritrea and the Ethiopian region of Amhara.

It is estimated that the war has killed thousands of civilians - there are no official figures - and displaced nearly two million families. More than 75,000 people have taken refuge in Sudan, a country bordering the Tigray region, fleeing the violence caused by both sides. The famine figures are equally alarming: more than 350,000 people are living in extreme hunger, the worst episode since the one that affected Somalia in 2011, and about 90% of the area's population is in urgent need of humanitarian aid, according to data from the UN.

Between April and May of this year, Jaume Torrado was in Tigray for about a month as an international volunteer of the NGO Samaritan's Purse, one of the few entities that have been able to operate in the area, in collaboration with the World Food Bank. The Access of humanitarian aid to Tigray is very limited and unsafe. In fact, Torrado explains that shortly after leaving Ethiopia, he learned of the murders in the area of three volunteers from Médecins Sans Frontières, including the Spaniard María Hernández.

With Samaritan's Purse, Torrado was engaged in distributing food to the various refugee camps and providing health care to about 400 people each day with two mobile units. "There were a lot of sick people, we couldn't know if it was due to Covid because we had no way of doing tests, but the situation was very serious", he said.

In fact, Ethiopia is a country that has long suffered from a very serious and chronic problem with malnutrition, especially with regard to children. "We have seen many children in a situation of extreme malnutrition", said the volunteer. 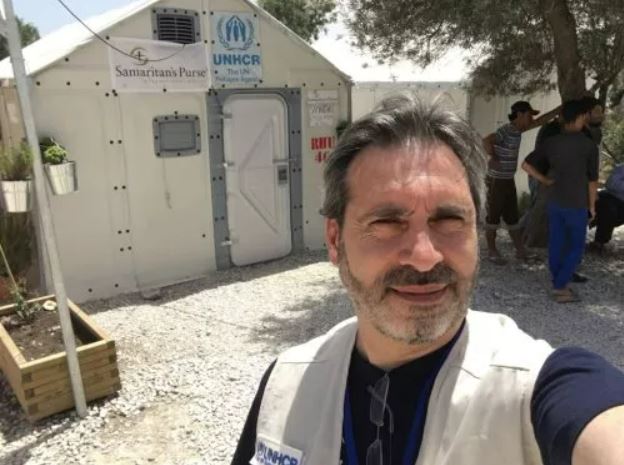 The situation he found in the region was bleak. Destroyed roads, cut-off communications and all sorts of signs of military conflict such as tanks, cannons and howitzers scattered through the streets. And the most shocking, the witnesses of the horror of the war: “We spoke to many refugees from the camps who told us how thousands of families had disappeared and mass abductions and rapes of women and girls with extreme brutality had taken place”, he explains.

It is precisely these systematic acts of sexual violence in the region that have prompted a recent report by Amnesty International (AI), which has exposed the atrocities of allied forces in the Ethiopian government.

"We have denounced how members of the Ethiopian National Defense Force, the Eritrean Defense Force, the Special Police of the Amhara region and Fano, an Amharic militia, have subjected Tigray women and girls to rape, group rape, sexual slavery and a series of atrocities that could amount to war crimes and possible crimes against humanity”, Ana Gómez, a spokeswoman for Amnesty International (AI), told Xarxanet.

The seriousness, violence and systematisation with which these crimes are being committed, she points out, indicate that women and girls from Tigray are being used as a "weapon of war" to inflict physical and psychological damage on the victims, and she highlights the "ethnic component” of these attacks, aimed at harming the ethnic group to which they belong.

The AI spokeswoman also focuses on the difficulties of accessing medical and humanitarian aid, which aggravates the situation of those affected. "These women and girls are in a situation of absolute trauma because many of them have been forced to witness other rapes or have been raped in front of their own children. It’s very urgent that they have access to medical, psychological and humanitarian support", says Gómez, who points out that this is not possible because many medical facilities have been destroyed during the conflict or are far from where these people are.

The difficulties of international organisations in accessing the area and the information blackout that affects this conflict, which is not very present in the media, where Afghanistan now occupies all the front pages, are not good news either. Gómez explains that, for example, AI cannot access Tigray right now, and she warns of the danger of this information opacity: "As long as what is happening is not communicated, there will be more impunity for perpetrators of human rights violations", she points out.

And what about the international reaction? According to AI, so far its weakness is hard to justify. The organisation has called on the UN and the African Union to urgently send a team of experts to Tigray, as established by UN Security Council Resolution 1888, and to deploy a special representative on sexual violence in conflicts on the ground, given the seriousness of what is happening.

Gómez also called on the African Union to increase its public and private commitment to the conflict, among other demands. "The international community cannot remain impassive for another minute about what is happening in Ethiopia," she said.

Jaume Torrado heard the testimonies of the victims of these atrocities and acknowledges that the experience affected him psychologically more than any other, despite his extensive experience as a volunteer in conflict areas. "In Tigray I heard and saw the cruelty of human beings to other human beings, and it was very shocking", he recalls.

About the future of Ethiopia, the region and the conflict that is making Tigray bleed, the volunteer is not optimistic and predicts that all this "will not have an easy solution because the internal damage is very serious and the wound will take a long time to heal". Now, after a ceasefire decreed in July by the Ethiopian government that lasted just over a month and was broken by the appearance of about fifty corpses in the Setit River, on the border of Tigray with the Sudan, the situation in the region is again worrying, especially the possibility of the conflict spreading to other regions of the country.

"I’m afraid that the situation will go on for a long time because, besides the physical damage, there is a huge moral damage, the unity and coexistence in the country, which were very difficult to achieve due to ethnic differences, have been destroyed, and what’s worse, this may destabilise the whole horn of Africa”, concludes Torrados.