The struggle of Kurdish women: a liberating empowerment

Leaders of the Kurdish people's liberation movement, the women of Kurdistan, the largest stateless region in the world, are approaching feminism and gender equality through their struggles.

Divided between Syria, Iraq, Iran and Turkey, the people of Kurdistan are the largest ethnic minority in the Middle East. Subject to oppression, the Kurdish people began a liberation movement two decades ago, in which women have played a key role. Based on democratic confederalism, it has ecology, direct democracy, communitarianism or feminism as pillars of the revolution.

Thus, feminism and gender equality have begun to take root in the Kurdish people. The struggles, led by women, have empowered them by making them visible to the point where they weren't in the imagination of the people. "The struggles of the nineties have, as their main axis, to end patriarchy. In this prioritization, women take on a special relevance, considered as a vanguard of change”, explains the member of the Plataforma Azadî, Haizea Yetes.

It was the images from 2014 of the Kobane attack when the struggle was made public around the world, based on images of armed women fighting against the Islamic State. Leading the liberation movement, Kurdish women have been empowered in intellectual and military training. 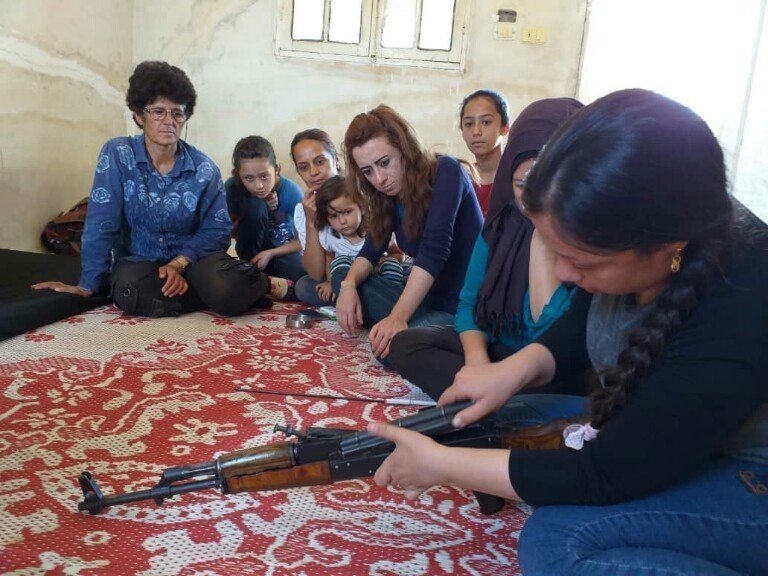 The role of Kurdish women

Empowered in the military, women in Kurdistan have more inclusive training in gender equality. Although the countries where the Kurdish people are located have specific characteristics that go against this gender ideology, the Kurdish population has a different imaginary in this regard.

"All the institutions in the Kurdish part of Syria apply absolute equality between men and women at all levels of leadership. In schools, for example, there are more women than men as principals, but in the militias it is balanced. The aim is for men and women to walk at the same time", explains the director of KurdisCat, Jordi Vázquez.

According to Vázquez, "the situation of women in Kurdistan is worse than in the West, but it has improved more. The legislation punishes people who assault women and are socially expelled. In cases of gender-based violence, the abuser cannot access the civil service and can lose his job".

In addition, men who want to become civil servants receive specific training: "In Syrian Kurdistan, if a man wants to be a policeman, he has to pass some basic criteria of feminism. This makes them see the perspective of women, know their history and roles of society", said the director of KurdisCat.

Kurdistan has unmixed structures designed by women, such as peoples made up only of women and children, communities ruled by women in equity in public office, have tougher legislation on aggressors or only women can judge cases of sexual harassment.

Although it seems an ideal situation and they have a better conception from the Kurdish people, the repression suffered by the people, and the policies and speeches of the leaders of the countries where Kurdistan is located, leaves much to be desired. If we think of Syria, Iran, Turkey or Iraq, the concepts of feminism or gender equality will not be among the first to appear.

As Haizea explains, "in a feudal society, patriarchy materializes in a very conservative way, women have a secondary role in being at home caring for children and the economic part comes from husbands. The most important challenge is to continue working on mentality, education and training so that women can lead this new imaginary".

Whether women are the leaders of the Kurdish people's liberation movement, creating their own militias, facing great powers or having their own structures, does not completely eliminate violence against women. Unfortunately, it is a scourge that continues to be institutionally established.

“All the policies of the country (Turkey) and the discourse of politicians legitimize and invite violence against women. It's a problem that has been around for twenty years ", emphasizes the founding partner of ColectivaT, Özgür Günes. "Kurdish women are suffering from institutional violence. Maybe for someone else it’s discrimination, inequality or contempt, but for me it’s institutional violence. If anyone thinks that the liberation movement of the Kurdish people is out of masculinity, Kurdish women would not say the same thing", adds Günes.

Kurdistan has been fighting for years as a repressed people for its liberation. In addition to the gender struggle, the Kurdish people have to face prison for defending their ideas. "There are many people imprisoned for any expression of support for the Kurdish people," said Yetes.

Without going any further, Öcalan, the founder of the PKK, was imprisoned in 1999 on the island of Imrali in Turkey. Since then dozens of people have ended up in prison being accused of terrorism or exiled around the world to avoid being imprisoned.

"The Kurdish population is under a lot of pressure, more and more people are losing hope of being able to live in the country with full freedom, and repression is increasing. And the spirits of a people are fundamental ", urges the founding member of Col·lectivaT.

According to the report ‘Repression, resistance and self-organization of women in Kurdistan. The case of Amed' of the Ciemen organization, "cities are bombed, representatives of the HDP (People's Democratic Party) are arrested and imprisoned, civilians are killed and social, political and cultural structures are outlawed. Kurds".

Last March, the prosecution called for the outlawing of the Peoples Democratic Party, linking the party to the PKK, a Kurdish guerrilla organization considered a terrorist organization in Turkey. The prokud party, HDP has denied any ties to PKK condemning its armed struggle. The European Union, however, has warned Turkey that the outlawing of the party violates the rights of millions of voters.

The macro-trial against one hundred and eight members of the pro-Kurdish party began on Monday, April 26. The prosecution accuses them of twenty crimes, including violating the integrity of the state, murder or belonging to a terrorist organization and calls for life imprisonment for all.

The Kurdish people, in addition to fighting repression as a repressed people, join the policies and ideologies of the states in which they live. The world's largest stateless nation must face the governments of Syria, Turkey, Iran and Iraq.

Turkey, with Erdogan at the head of the government, is one of the states that has fought hardest against the Kurdish people. "In Syria, after the withdrawal of the United States in 2019, Turkey began another attempt at extermination under complicit international silence. Thousands of displaced people and deaths have piled up on a long list in the new years since the war lasted”, they explain from Ciemen.

Applying these government policies to women, the member of the Plataforma Azadî assures that “there is a clear focus of the Turkish state towards women. A few months ago, in Rojava, three women leaders of the Kurdish movement were attacked. They were gathered in a house and were killed by a drone at three o'clock", she recalls.

Syria's intermittent but continued war is another factor that most affects this area. Religion, however, becomes a key piece when we talk about feminism in this area. As they explain from KurdisCat, “we have more problems when religion appears. The Arab ethnic group living in Syria follows the sacred text that tells them that man is superior. When a woman has a problem with her father or husband, they look for a man to act as a partner between her and the head of the family". 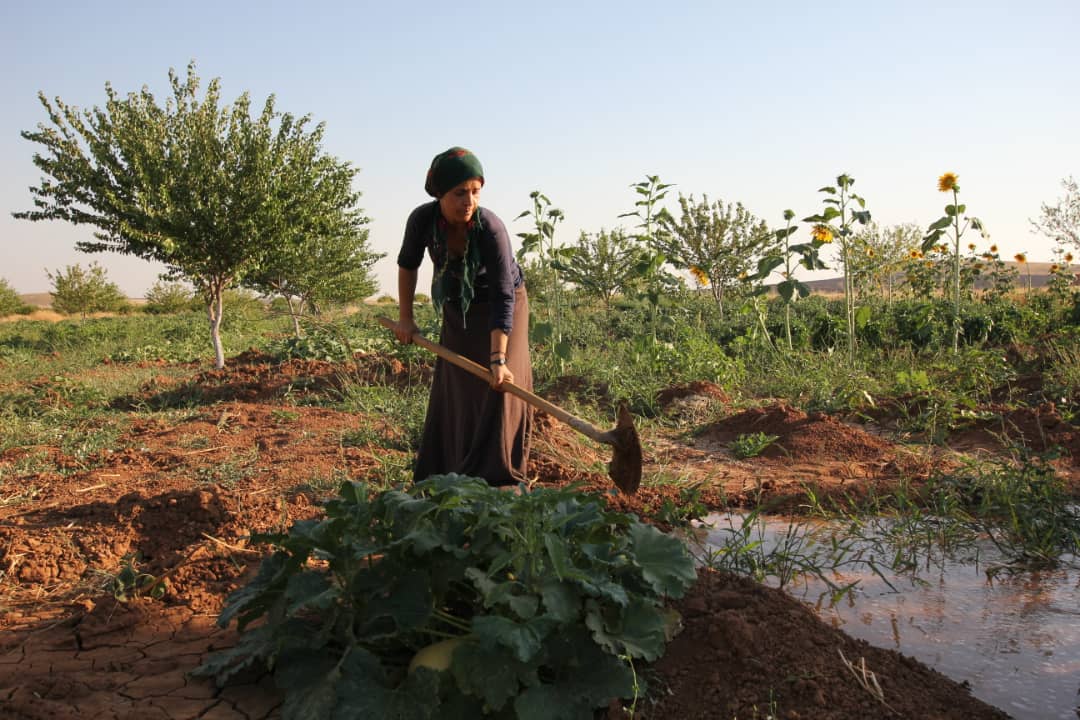 The mountains, a symbol of the revolution

"In the 1990s, Kurdish women in Turkey marched into the mountains and were welcomed by the guerrillas there," Vazquez said. "Öcalan made feminism one of the main goals of the liberation of the Kurdish people, and it is from here that women reach political office," she added.

Thus, the mountains become a symbol of freedom for women. Hosted by them, the guerrillas and women create a non-mixed community, an example of the self-organization and resistance of Kurdish women. "In Kurdistan, they say that the only friend of the Kurdish people is the mountains, because it has been in the mountains where their resistance to repression has historically been organized," the Ciemen report agrees.

Following the idea shared by all interviewees, the Kurdish people’s liberation movement is closely linked to the gender and women’s liberation movement. There are many actions to be taken and it is clear that women in Kurdistan are not free of masculinity, but they are a good example of how to educate and train Western societies in women's self-sufficiency and leadership to take a step further towards feminism and gender equality.