Several organizations are calling for measures against abuse, torture and ill-treatment inside prisons

Fourteen associactions have proposed a decalogue to guarantee the rights of inmates and demand that the administrations put an end to prison violence.

Last August, an inmate at the Villena (Alicante) prison, who is part of a mental health care program, was brutally beaten by officials guarding him. Subsequently, the jailers themselves assaulted and threatened the Deputy Director of the prison for fear that she would make public the abuses and ill-treatment exercised from the prisons.

Episodes like these and the obstacles that prisoners face when it comes to reporting them aren't isolated facts. Considering this context, various social associations have been organized to act facing of the injustices experienced in prisons. Specifically, fourteen associations have joined forces to present a decalogue of measures addressed to the General Secretariat of Penitentiary Institutions (Secretaria General d'Institucions Penitenciàries in catalan) and to political parties with parliamentary representation.

In this document, the associations request, with the support of the relatives of the prisoners, to end torture and ill-treatment in prisons and enable tools to ensure the right of prisoners to access a complaint process.

On the one hand, the text requires the Spanish Attorney General's Office (Fiscalia General de l'Estat in catalan) to create a circular note on the investigation of the crime of torture. At the same time, it defends the need to influence the training and continuous evaluation of civil servants. In addition, they demand that the identification numbers they wear on their vests be made visible. 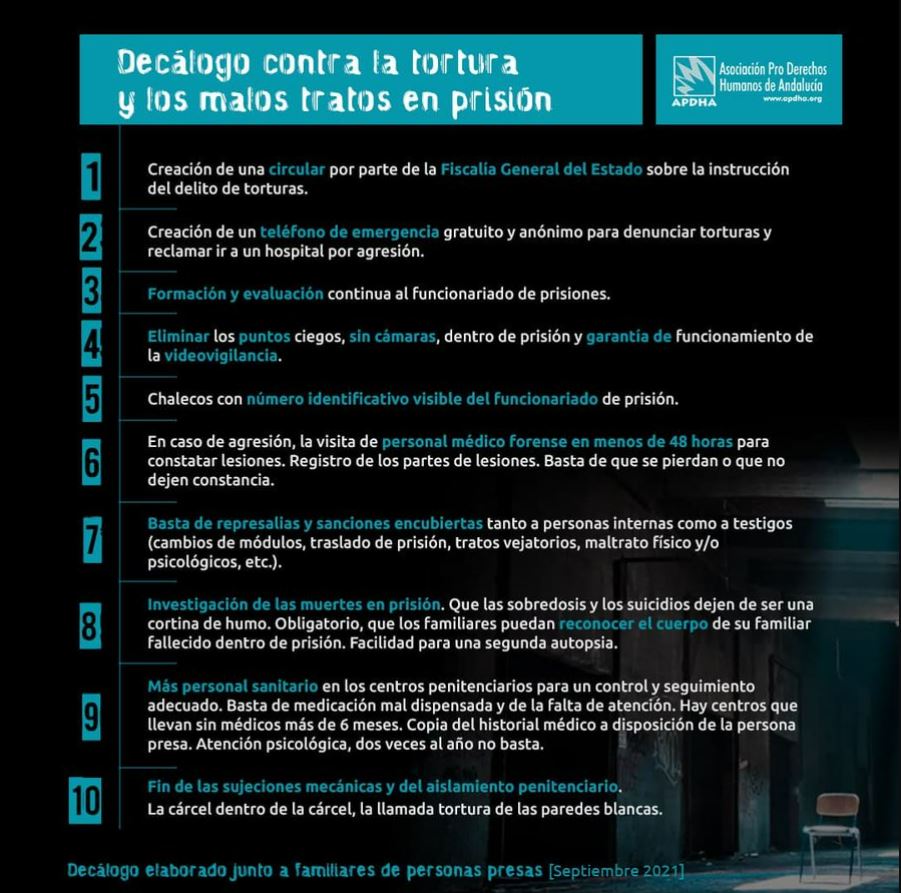 On the other hand, organizations agree that more tools need to be given to help prisoners. An example of this is to offer a free emergency telephone so that they have the autonomy to report abuse and go to a hospital in case of assault, or the fact of removing blind spots in prisons where the cameras don't reach and ensure the operation of the video security system.

"We consider essential that prisoners be able to have ways to present necessary evidence", defends Mireia Salazar, Coordinator of the Prisons Area of ​​Iridia, an entity adhering to the Decalogue. "Methods of proof such as surveillance and security cameras are a preventive measure which at the same time guarantees the right of individuals to access a complaint process".

Another important point claimed by organizations and relatives is that, in case of assault, it requires the visit of medical staff within 48 hours. However, the document calls for increasing the number of health personnel in the centers and strengthening psychological care to ensure proper monitoring of the health status of prisoners.

The text emphasizes thorough investigation of deaths in prisons. They argue that the recognition of the body by relatives is mandatory and that a second autopsy is provided if necessary. The Coordinator of the Area of ​​Prisoners of Iridia expresses that they don't detect changes in the treatment of the cases of situation of death in the prison. "The role of the administration is very residual and research is superfluous, especially in order to provide clear and concise information to relatives", said Mireia Salazar.

The Decalogue also denounces retaliation and covert sanctions, such as harassing treatment, physical and psychological abuse or module changes, among others. On the same issue, he also calls for an end to ‘prison within prison’, that is, to solitary confinement.

The reality through the numbers

The assaults suffered by a prisoner at the hands of the officials of the center of Villena is, unfortunately, no exceptional fact. "We can't talk about isolated facts considering that situations of torture and ill-treatment should be zero", says Mireia Salazar. "They are people who are in state custody and there is a duty to protect them, even if it's not always the case".

The figures show this. The National Mechanism for the Prevention of Torture (MNP), an organisation that oversees detention centers, released a report last year showing the existence of 94 open proceedings for bad practices and ill-treatment of detainees.

On the other hand, the reports of the Committee for the Prevention of Torture of the Council of Europe (CPT), report specific cases in the supervised centers of the spanish state, such as slaps, punches or beatings with batons, among others. In addition, we should highlight the results of the latest report of 'Torture in the Spanish State' published by the Coordinator for the Prevention and Reporting of Torture, a platform that collected up to 58 reports of abuse of prisoners during 2016 .

In this context, the entities work and join forces to guarantee the rights of prisoners and raise their voices to demand political and judicial will to end prison violence.